Last Sunday, a few people from the class and I attended the Japanese New Years Celebration hosted by the Japan Commerce Association of Washington, DC (JCAW). There were numerous events, such as taiko performances, to countless food stalls and games. There was even a shrine to pray/wish at, and receive your omikuji (fortune slip)!

It was a very family oriented event, and there were mainly Japanese families attending. I was really overwhelmed to hear all the Japanese around me, it felt as if I’d gone to Japan almost. I could understand it mostly, but when I was waiting in line, a lady came up to me and asked me if I was waiting for the line, in Japanese of course, and I blanked out immediately and just kept stuttering. I was really embarrassed that my Japanese wasn’t as good as it was in class. I want to work harder to be able to respond more readily and engage in conversation easier. Coming to this event really helped me think about my future as a translator, and kind of scared me a little, as I thought that I wouldn’t be able to keep up, but of course I want to continue, so I’ll try my best again next year. 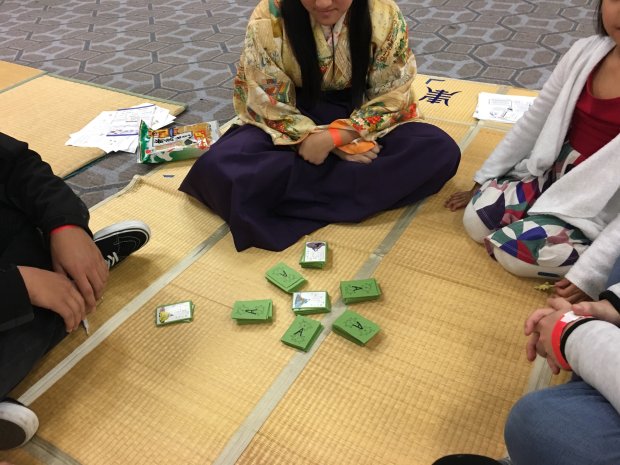 The one time I did use my Japanese well, or responded easily, was when I was playing karuta with Kenny, Luis, Maria, and two girls who were at the celebration. One of the girls was only six, but spoke mostly Japanese to the girl who was teaching us how to play. I wanted to get pictures for the blog, so I asked the older girl if it was okay in English and she said sure. But then the little girl asked me what I was doing, so I asked if it was okay that I take her picture in Japanese, and she said yes. I was really proud of myself for being able to respond so readily. Although afterwards she asked what the picture was of, and I didn’t understand until the older one answered for me. I think I still have to learn and work on informal questions in that case then!

Overall, from the food, to the games, I really enjoyed karuta the most, even though it was the easy version. I played it multiple times because I really liked it and I won twice! The event was really eye opening for me and really helped put a perspective on things for me, and I want to come back again next year.