Recently, I’ve attended the J.LIVE event for the second time! J.LIVE is an annual speaking competition for university students studying Japanese. This event is held annually at the GW campus. The competition is comprised of three levels – Level I, II, and III. Three students compete against each other in each tier.

I arrived in time for the second level, and I was really excited to watch the presentations. Since I’d gone the year before, I had a general idea of what to expect when I came, and I was grateful to find the setup was still the same. During the presentations, students usually have a slideshow prepared, and explain their topic all in Japanese. Then afterwards, they open up questions from the audience, and then the judges in Japanese as well.

There was one presentation that caught my eye however. Usually most projects I’ve seen while attending are experiences with Japan, or something relating to a research project. It’s a bit harder for me to grasp the concept of what they’re explaining since I’m usually not familiar with the Japanese terms, but one presentation was different!

A girl named Yiman Wang stepped up, and instantly my mind clicked in recognition as her title popped up, paired with the image of a gacha card from an idol game. Her presentation was called “Virtual Idol, Sena-kun.” I leaned forward in my seat, and watched as she explained that Izumi Sena, a virtual idol from the game Ensemble Stars (Enstars), was her inspiration. She displayed pictures of her making friends and even cosplaying as ways the game has helped her branch out and have fun in life. All because of one virtual idol.

I don’t know much about Enstars, as I don’t play it, but I have friends who like it a lot! I could also understand more of the vocabulary she used, as it’s something I’m very familiar with, as I’ve played idol games similar to it, like Love Live and Idolmaster (both which focus more so on girl idols). It was really nice to hear, and I also found myself agreeing with her presentation points, as in what makes us happy in life. What drives us to be great? Even something like loving a virtual idol can help us all get through the day! I could relate, as I find using fictional characters as encouragement is a great way to push through, and find happiness in the things you do in life!

Recently in my struggles in school, I was losing motivation, didn’t really feel like coming as it stressed me out too much. But I had started reading a new novel and found myself daydreaming scenarios of the characters urging me on, helping me find the strength to keep going when I felt like it wasn’t worth it anymore. I experienced a life-changing turnaround. I frequently showed up to school early and started becoming motivated to finish my assignments despite having none before! I know the idea seems rather silly, to rely on fictional characters for support, but it can help in more ways than you can really imagine.

After the presentations, the rest I could understand the basic idea, but not any specific details. We went to go browse the expo booths, in which there were various Japan related companies and colleges! I even saw Kinokuniya there to sell books and manga! They even had a copy of Kimetsu no Yaiba (Demon Slayer), which is one of my favorite mangas that recently spiked in popularity, having sales that outsold One Piece which has been the long standing #1 for years! I really wanted to buy a copy, but unfortunately, by the time I’d circled back around, all the copies were gone! さすが鬼滅の刃ですね!

I got to see a lot of familiar faces, and some people had even recognized me from seeing me at various Japan events, which I was quite surprised to know they’d recognized me! At the end of the competition, and all the winners were announced, they introduced the new J.LIVE competition, now open for high school students! I really hope I can participate in it!! 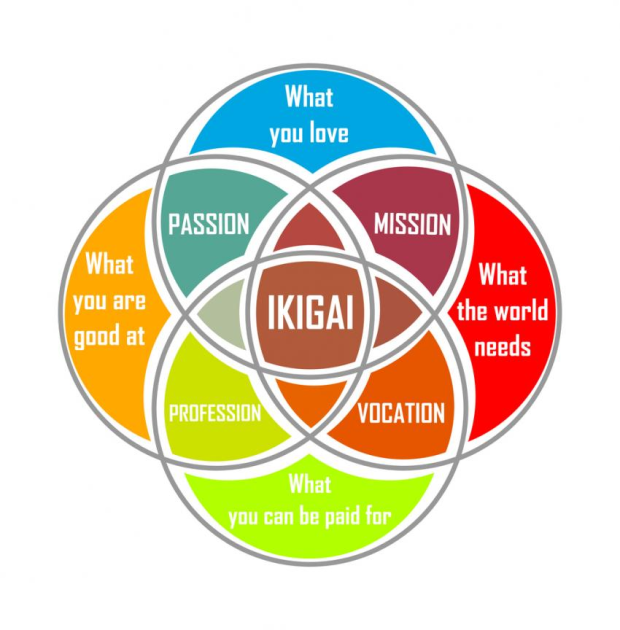 We recently learned about Ikigai in class. Ikigai is the purpose of living, and is broken down into what you love, what the world needs, what you are good at, and what you can be paid for, ikigai being the intersection of all four. A lot of people believe that finding your ikigai and following it can let you live with more direction and for longer. When we started learning about it, we were given a packet to read with a diagram of the four parts of ikigai intersecting, and we were gonna go around and share what we put in each part.

I don’t know what the world needs, or what I’m good at, but I’ve been told I was good at picking things up and putting things together. I’m not too sure what that meant, but it would explain why I can learn Japanese easily. I like to play games and draw, so I put those in the “what you love” section, and for the “what you can be paid for” section, I put making games and selling my work.

After we all shared what we put on the diagram, Sally asked us what we would reflect on positively when we’re older, and we all shared. I said that I’d probably remember the people I did things with more than the thing I did, and that they would make up for the things I didn’t like in that activity. At my school, since we don’t meet any new students past 6th grade, we make really close friends with our classmates, and more often than not we end up going to school more because we want to see our friends than because we need to, or at least I do. We wouldn’t be able to meet other people without looking for a new thing to do outside of school, so I hadn’t met many new people until I started this class.

Outside of our lovely Japanese Plus class, I went on a field trip to New York with my school! I go to an arts training school, Duke Ellington School of the Arts, which prepares us to work as an artist in the professional field, and there are various arts training departments you can audition into. I’m in the Visual Arts major/department, which means I learn a variety of art skills such as painting, sculpture, animation, drawing, and printmaking. Our first trip of the year was to the Frick Collection, as well as the Metropolitan Museum of Art (the MET).

Unfortunately, the moment I arrived in New York I had fallen ill, and could no longer keep up the enthusiasm I’d had prior to boarding. With great reluctance, I had to let my friend join a different group so I could leave the group to go get medication, and thus missed a great deal of the first museum. Luckily I was able to rush through it, although not to the extent I would’ve liked.

Still unwell, I made my way over to the MET, and had lunch, that was ridiculously overpriced, and overwhelmingly bland. However as I was ill, I didn’t really have any care for what kind of food it was. With new energy and my illness finally subsided, I’d returned to my earlier plan. The MET had an Asian art gallery, and I was determined to see the Japanese collection. I was beyond delighted to find a MET guide in Japanese, and used that to guide me. Not only that, I was more than happy that I could actually understand it enough to use it to get there!

Now that I was in the hallway leading to the exhibit, my excitement heightened as I admired modern Japanese pottery on display, noting the beautiful craftsmanship and effort put into it. My mother, who was accompanying me as a chaperone, was perplexed at the sight of one pot, exclaiming that it didn’t look as neat as the others. I thought about this for a moment before remembering the concept of wabi sabi—something I’d learned about in Japanese class—and explained to her that it was likely the artist’s intention for it to be that way. Or rather, nature’s intention if you will.

We finally headed into the exhibit and I was interested in the Chinese and Korean exhibits; however the exhibit for the Korean gallery was small, but still very nice. I also had recently become fascinated with the Chinese exhibits since at the time I’d started to read a fictional history/fantasy Chinese novel, and could now visualize what kinds of things the author drew on to create that novel.

As I exited the Chinese exhibit, I noticed two glass doors and atop them was a title reading: Sackler Wing Gallery! Now where have I heard that name before… None other than the Freer-Sackler Gallery of Asian Art! Thus I knew I’d found the Japanese exhibit and pulled open those doors to reveal a glistening beautiful glass statue of a deer. I gasped in awe and quietly made my way around each art piece, carefully examining each one, as well as the writing on pieces to see what I could decipher. 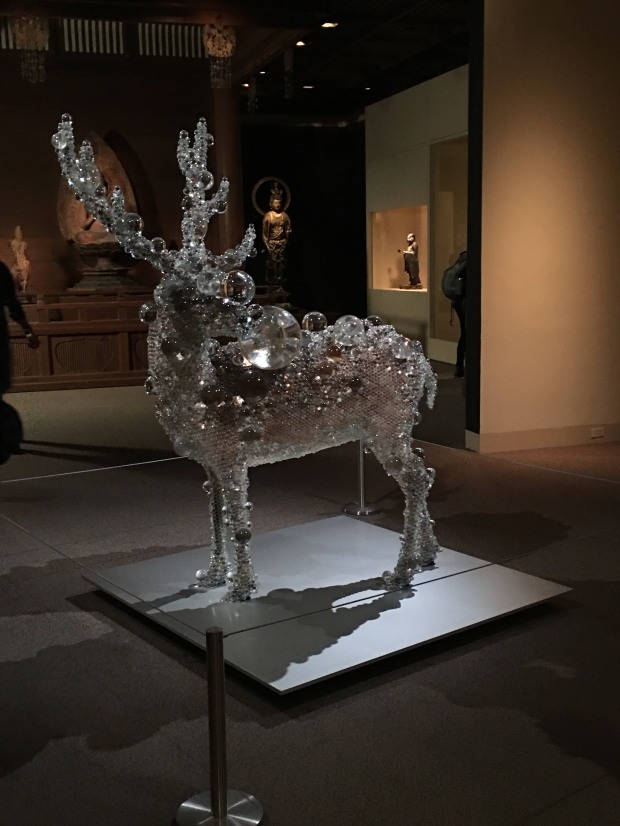 In many places there were very meticulously put together traditional rooms depicting historical architecture and interior design, or small enclaves displaying cooking pans and pots on tatami mats. My personal favorite however, was a large rock. To be more accurate, a fountain disguised as a large black stone. This is the Water Stone, created by Isamu Noguchi. Upon looking at the stone, I first thought it to only be rather shiny, but then I noticed the faint sound of water and realized that there was in fact, water flowing seamlessly over top the stone! It was very calming, and since the exhibit itself was quite silent, I simply sat there and enjoying sitting by it for a while.

Finally, I left the exhibit after looking around at all the pieces, and wandered around the museum until it was time for us to depart. Please do take time to visit the MET though, if you’re interested in Asian art, as their selection is gorgeous!