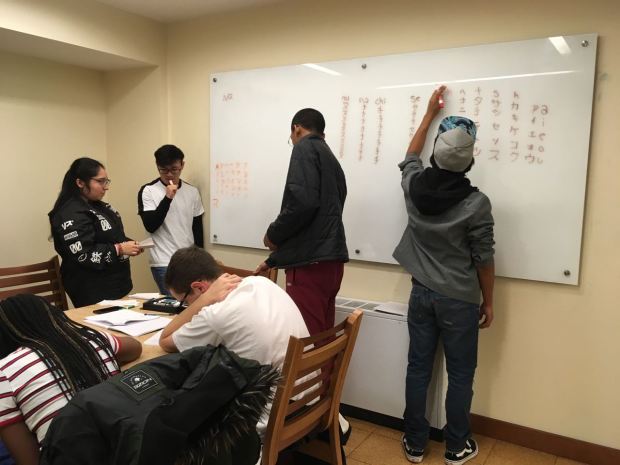 On October 27th, our program held its first boot camp for Katakana for our class. The boot camp allowed those who needed it and anyone else who wanted to come up to an hour after class to catch up on studying Katakana. The boot camp allowed students to study their Katakana as they liked. For example, I studied my Katakana by repeatedly writing the Katakana on the whiteboard that was in the room we were using, while pronouncing its sound. First I would write down as much Katakana as I remembered. After I realized I couldn’t remember any more, I made a note on the side of the Katakana I didn’t know. Once I had my list, I spent about 10-20 minutes memorizing those Katakana by reviewing them in the booklet we were handed out that contained all of the Katakana. Next I would repeatedly write them on the whiteboard until I felt that I memorized it. Finally I went back and wrote down all of the Katakana including the ones I studied to make sure I had everything memorized. However, I repeated all of my steps again if I was still forgetting some Katakana.

Of course, this was just my way of studying; other people had their own strategies. Some people preferred to use flashcards that Eshita-sensei had given us to quiz each other on the Katakana. Others preferred to listen to music while looking through the booklet. The boot camp, despite being in a small room, was surprisingly pretty quiet as everyone was working hard to catch up on the content. To make sure that we had learned the Katakana, Eshita-sensei had us write as much of the first 25 Katakana as we knew after studying as our quiz. I scored 96% on the quiz because of the time I got to study in the boot camp.