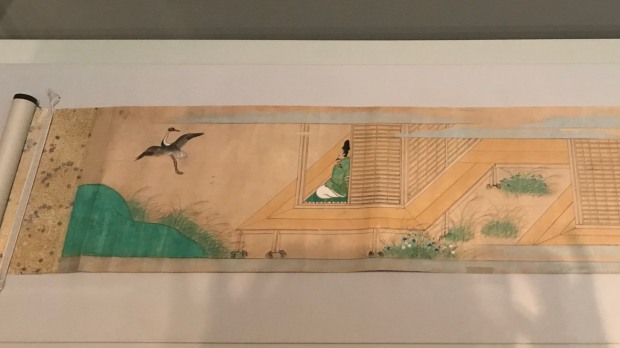 The Tale of The Crane is a story about how a man saves a crane that was about to be killed. Soon after, a beautiful young woman comes to the man’s house for a night’s lodging. She later marries him and reveals that she was the crane who the man had saved. So she then promises him a long and prosperous life and returns to being a crane and flies away. This story illustrates how doing good deeds will be later rewarded. This handscroll was made in the Edo period in the early 17th century and was created by ink, color, gold, and silver on paper.

The reason why I decided to choose this artwork from our visit to the Freer was because it reminded me of a vocaloid song, originally by Rin Kagamine & Len Kagamine, called “Seasonal Feathers” sung by Youtubers Lyrratic and SirHamnet. The song is based on The Tale of The Crane, however, the ending is different. In the song, after the man saves the crane and gives her a place to stay, the crane falls in love with the man and was scared that the man would not love her and abandon her because she was a crane. During the summer, the man grows ill while working in the fields, but does not have enough money to buy medicine and cannot earn any more because of his illness. The crane decides to weave cloth to sell, however, she uses her own feathers to make the cloth. The two eventually died later, the crane from overworking and the man from his illness, and it is revealed that the man knew that she was a crane all along, but had still loved her for who she was.

Check out the song here: https://www.youtube.com/watch?v=y0dvRMnmN2w