On November 11th J-LIVE was held at George Washington University, and my classmates and I went to go see it. I stayed the entire time and the competition was really interesting. It’s a Japanese speaking presentation contest between college students. I studied outside of our class, but even still I couldn’t understand a lot of what was said. I only really understood the general idea of it. But nonetheless, I was still really interested and I hope to one day be able to speak as well as the contestants.

After the competition ended and the results were announced, they had a small movie showing. The movie was called A Tale of Samurai Cooking: A True Love Story. It was a really interesting movie mainly revolving around the story of a samurai (Yasunobu) who was the son of a kitchen samurai (similar to what we’d call a cook or a chef), and his wife. His wife, Haru, was a really good cook and she was asked to marry him so he can become a better cook.

I was really interested, because the movie displayed the  gender roles in that era of Japan. Haru was considered undesirable, because she’d been married before and divorced and I found that interesting. I also found the succession of family roles intriguing, because in the movie Yasunobu has to succeed his father as kitchen samurai. Not a major spoiler but another character, Sayo, is the daughter of a dojo owner. But unlike Haru, whoever marries her will succeed her father, since she’s the only daughter and therefore she doesn’t have to move into her husband’s house. 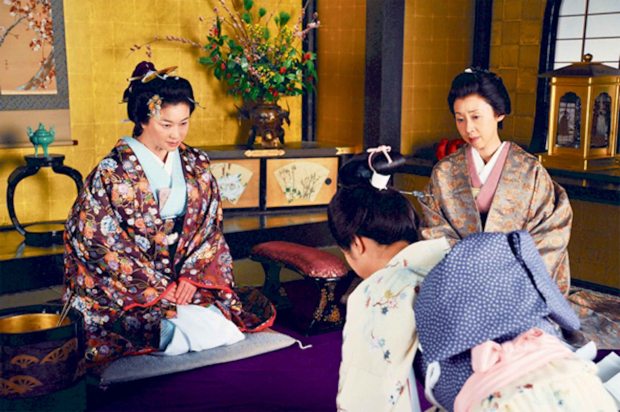 Overall I found the movie really interesting and I even showed it to my family over Thanksgiving break. I really liked Haru’s character and how Yasunobu changed over the course of the movie. It really showed how much Japan values food and cooking. And how much they pay attention to detail when preparing the food. If you have the chance, please watch A Tale of Samurai Cooking: A True Love Story.