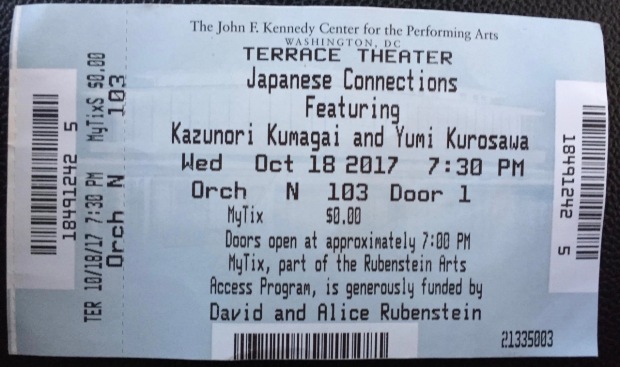 Today October 18, 2017 was an extremely emotional and eye opening day. I was given the opportunity of witnessing a beautiful artistic performance from Kazunori Kumagai, a world renowned tap dancer from Sendai, Japan at the Kennedy Center in Washington, DC. My emotional journey started when we first arrived at the Kennedy Center, and we were lucky enough to be able to actually speak with Mr. Kumagai. He told us his story about how he was inspired by Michael Jackson’s Thriller when he was five and then became interested in tap dancing. When he was 18, he moved to New York City to study tap dancing among the best in the business. 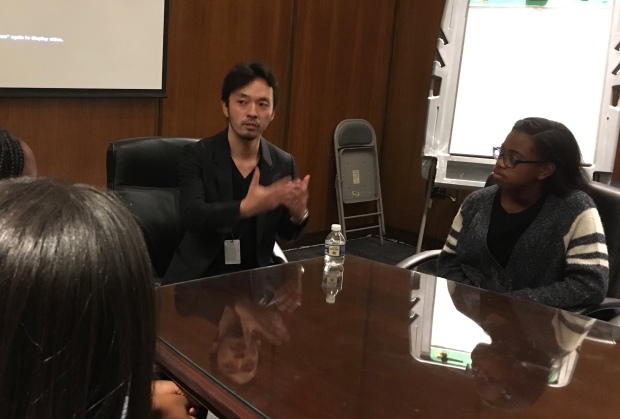 The most touching aspects of his story to me were how he took in criticisms from his teachers and peers back in Japan when he said he wanted to be a tap dancer. Kazunori Kumagai was not afraid to follow his heart and disregard social expectations and opinions of him that may have led him down a path that he wasn’t happy with. Despite obstacles such as race that may have arisen in Mr. Kumagai’s path, he was able to receive praise and accolades for his determination to showcase his self expression. Additionally, since I traveled to Tohoku, Japan this summer, I was extremely inspired by Mr. Kumagai’s dedication to his hometown as he often returns to Japan to assist with the reconstruction process after the 3.11 earthquake and tsunami, and raise awareness about the arts.

Then came his tap performance. Honestly speaking, before witnessing his performance, I didn’t think much of tap dancing. But boy, was I wrong. I don’t even know how many times I cried during his performance. His ability to tap in sync with the other instruments present during his performance simply amazed me. When we spoke to Mr. Kumagai earlier, he told us that tap dancing sounded like a conversation between his feet and other instruments. There is truly no better way to put that. The melody, rhythm, and balance of the performance sounded like a story that directly related to my life. I couldn’t help but feel my emotions well up. I was so amazed. After today’s experience, I learned a few new things: