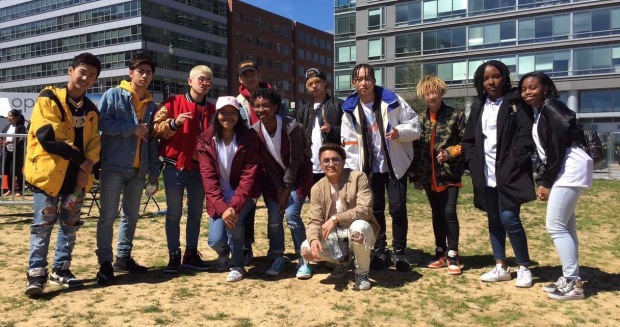 My shift for our booth at the Cherry Blossom Festival was from 4-6 p.m. and I had arrived at about 10, so we had a lot of time to explore the festival until our shift. A few of us spent a lot of time at the JPOP stage, where there were various Japanese performers performing throughout the day. The performances ranged from bands to dancing groups to fashion shows. My favorite performances were by a J-Rock group called Kanadete sourou and a J-Pop group called Jr. Exile. I’d never heard of Kanadete sourou and I’m not a big fan of rock, but I really enjoyed the songs they were singing considering the female vocalist had a really amazing voice and she was really energized. Another thing I liked about them was that the speakers were really loud, so you could really feel the vibrations from the drums and guitar. I knew Jr. Exile because two days prior we had watched them perform at the Japan Bowl, so I was really excited to see them because I was amazed by their performance at the Japan Bowl. I think their performance at the Cherry Blossom Festival was better than the Japan Bowl because the audience was louder and more pumped, which made the performance more exciting. I really liked Jr. Exile because they’re really good dancers and very good singers. I especially liked the dancing because they were in-sync and they did a few stunts as well. This was a really great experience because it has influenced me to explore more about them and their music.