I took the SAT multiple choice test (and essay) on March 1st, and my AP Language and Composition teacher kindly decided to let my class and me watch a documentary rather than write our weekly practice essay when we came to her class the next morning. After some debate about which documentary we could watch on Netflix (our teacher wanted us to choose one from which we could identify what the film was asking of the audience), we chose the documentary “Jiro Dreams of Sushi.” This hour-and-then-some film catalogues the daily life of Jiro Ono, an 85 year-old Japanese man who is renowned as the greatest sushi chef in the world. Being in a Japanese class, this film naturally intrigued me.

A large portion of the documentary followed the day-to-day chores of Sukiyabashi Jiro, Jiro Ono’s restaurant with only 10 seats and a ¥30,000 month-in-advance reservation fee (which does not include the price of a meal). Seeing all the different types of sushi and the careful preparation made me, a person who is not a huge fan of seafood, hungry for sushi! 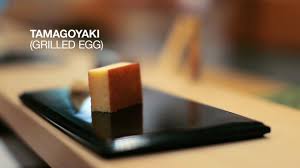 A small section of the film was dedicated to Jiro’s eldest son and future successor, Yoshikazu, describing his experience with learning how to make tamagoyaki, a dish made from pan-fried egg. I have had tamago sushi rolls at the Wasabi sushi shop in Tysons Corner Mall, and they are my favorite kind since I don’t like seafood very much, but still want to eat sushi with my friends! Yoshikazu’s tamagoyaki looked so good that I plan to learn how to make it, and the discipline that he put into his work made me appreciate what a food critic, who frequents Sukiyabashi Jiro, calls the Japanese work ethic.

Yoshikazu explained that he had ten years of training with other types of sushi prior to being allowed to attempt making tamagoyaki for the customers. He had assumed that tamagoyaki would be easy to make compared to other sushi types, but as his father tasted over 200 of his practice dishes and had disapproved of each one, he recognized the difficulty of making tamagoyaki. Regardless, he persisted and came to make tamagoyaki that his gourmet father approved for sale. Not once did he consider quitting his efforts or arguing to his father that his dish was good despite what he said. He absorbed each criticism and kept working and improving. This kind of trait is one I wish to learn more about, since I can be argumentative when my work is criticized. If it truly is a staple characteristic of the Japanese workforce, then I believe that I could learn how to take criticism better by studying or working in Japan, so I will keep working and improving my Japanese!

Yoshikazu in the workplace says, “I have been practicing
making the egg sushi (tamagoyaki) for a long time.”