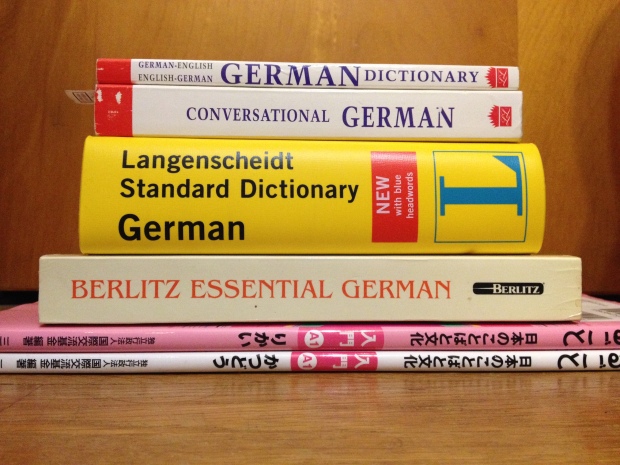 When I learned the word for Germany in my Japanese class, it immediately caught my attention. The Japanese word for Germany, Doitsu, closely resembles Germany’s name for themselves, Deutschland. In fact, more so than any other name for Germany that I had ever heard in another language. What more, I wondered, could the two languages have in common?

Both languages, though, can be intimidating for language learners. One of the reasons that both languages can be considered difficult is the writing systems. German shares the same Latin alphabet as English. It has only four extra letters (Ä, Ö, Ü, ß) and five letters with different sounds from their English counterparts (C, J, S, V, W). Japanese, by contrast, has two different syllabic writing systems (Katakana and Hiragana), and one logographic writing system (Kanji). Written Japanese alternates between these three alphabets, depending on the word’s part of speech and origin.

Though the writing system may sound complex, Japanese is in some ways a very simple language. Unlike German, it has no grammatical gender, plural forms, or articles. Verbs are not conjugated, and nouns are not inflected to show case. However, it does contain grammatical features that are not part of English or German. Japanese particles can be difficult for English speakers to become accustomed to. Particles indicate the relationship of two different words in a sentence. Different particles can indicate anything from location to possession. Particles exist in both German and English, but in neither are they such a significant aspect of the language as in Japanese.

Another reason German can be considered difficult is die Wordstellung (Word order). German follows a word order similar to English, unless conjunctions or other components indicate that there must be a change in the order of the words in the sentence. Japanese also has a set word order, but the word order is different from both German and English, which can be difficult for speakers of Germanic languages to pick up.

But Japanese and German do share some characteristics. Unlike English speakers, German and Japanese speakers indicate levels of formality with their grammar. In German, the formal pronoun ‘Sie’ is used to address others formally. In Japanese, formality is indicated not only by prefixes and suffixes (honorifics) attached to the name, but also by choice of pronoun and the components of the sentence included in a phrase.

So what do I think of each language? Well, I have been learning German for nearly two years, and Japanese for only half a year. Between the two languages, German has been much easier to both learn and practice, due to the similarity to English (my native language) and Spanish (my second language), the abundance of resources online, and the commonality of German-speakers in the western world. I have also had more occasions to use German, but only because my fluency in German is greater than my fluency in Japanese. However, Japanese is a more rewarding language to learn. It takes more work to learn grammatical principles of Japanese, but that only makes communication a greater victory.